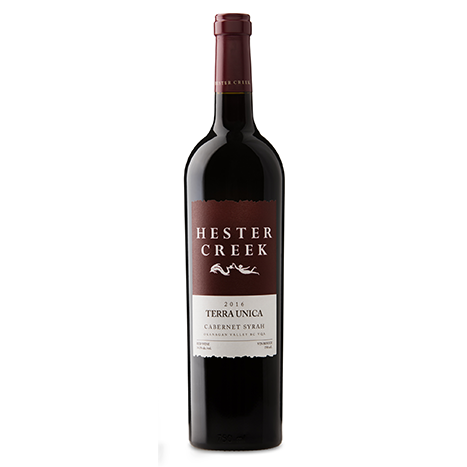 HARVEST REPORT:
The 2015/16 winter was relatively mild with no extended periods of major freezing, resulting in uniform bud break. Spring was one of the driest on record; with Growing Degree Days (GDDs) the highest ever recorded in May. These warm, dry conditions resulted in bud break two weeks earlier than anticipated. The warm temperatures continued through June, suggesting that harvest could commence as much as a month earlier than normal. However, temperatures changed in July; making it the fourth coldest July on record. This cooling July trend, combined with some unseasonal rain, slowed down the ripening process resulting in beautifully complex flavours. Cool fall nights ensured great acid structure. Harvest commenced in early September, much earlier than normal. Overall, the 2016 vintage was outstanding for both whites and reds.

WINEMAKING:
Our exclusive Terra Unica red blend draws its structure from the Cabernet Sauvignon, of blocks 7 and 8 on our Estate. The Syrah was sourced from a long time grower on the Black Sage Bench, Sage Brush Vineyard, and contributes a beautiful old world elegance to this small lot wine. These grapes were hand-harvested and put through an extended maceration. The two varietals were blended very early on in the winemaking process, and allowed to age gracefully in a combination of 25% new, 25% old, and 50% neutral oak barriques.